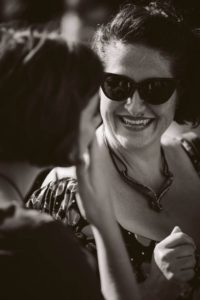 Tamar Rose is a Sussex based ceramic artist and designer-maker. She divides her time between making, exhibiting, and teaching. She works in primary schools and teaches adults at Northbrook College and from her home studio in Steyning.

Tamar’s range of contemporary porcelain is born of a fascination with dramatic forms – their textures, movement, contrasts and silhouettes.

She has always felt compelled to create in three dimensions – this has included forays into other mediums such as metal, fabric and willow. Ultimately though, the plasticity and malleability of clay offers the most flexible material in which to realise her visions.

Each piece or collection of pieces is unique and part of her journey as a maker.

Tamar is constantly evolving as a designer-maker, and this has taken her from the Harrow tradition of thrown functional ceramics, to her current range of decorative porcelain, and more recently a range based on Victorian natural history specimens.

Having completed a degree at Harrow, Tamar has been actively involved in setting up a community studio, been accepted as a member of the Sussex Guild, exhibited at “The Ceramic House” as part of the Open Houses project in Brighton, which includes Shoreham, Seaford and Worthing, and more recently was made a member of the Craft Potters Association.

Tamar’s original and unique ceramic pieces have been sought by collectors all over Europe and the United States. Her work can also be found in a selection of galleries within the UK.

She enjoys working in porcelain paper-clay because its translucent, almost ethereal quality lends itself so well to the forms she creates. A combination of hand building techniques are used including rolling, impressing, sprigging and moulding.

The work is fired to a high temperature giving it amazing strength, often with a final lustre glaze completing the alchemy.